Fishing barrows are a great way to transport your gear to the swim. There's a wide variety of sizes and shapes, there's even electronic barrows on the market now! Essentially a barrow is an upgraded wheel barrow allowing you to take more luggage. This guide will cover the different types of barrows and hopefully help you choose one right for you. We also have a Buyers Guide to Carryalls if you're looking for some extra space for your tackle.

The first thing to consider when buying a fishing barrow will be your budget. Barrows have a huge range of prices, from around £100 and some even going past the £900 mark. The more expensive barrows will have extra features such as the frame being adjustable, mud feet, saddle bags and under trays. So the price you pay on a barrow might be on how much gear you have and how far you typically need to walk to your swims.

Most barrows have similar designs and all have the same purpose of transporting your gear easier. The typical barrow design has a squared frame with a central wheel. Two handles at the back to lift and move the barrow and two legs to hold the barrel while still. Most designs also have a v shaped frame at the highest point so that rod holdalls can sit safely.

An important factor to consider when buying a barrow is its size. If you don't have a van and there's not tonnes of space in your car then you'll want a barrow that folds down. Some barrows are non foldable and can be taken apart for transport, however a foldable barrow makes it much faster to set up. Also if you're prone to taking a lot of gear during sessions then you might want to look for an extendable barrow. That way you'll be able to adjust the size of the barrow to fit your needs.

HOW TO LOAD A BARROW?

The best way to load a fishing barrow is by placing most of the heavy gear at the front, above the wheel. That way the weight won't be pulling down as much at the handle section and will make it a lot easier to push the barrow. Although, the barrow will still have to keep some balance otherwise your items will keep falling off. Also, if your fishing barrow doesn't feature any sides and gear keeps falling off, then try placing the bedchair flat at the bottom of the barrow and lift its legs which can prevent items from falling off the sides.

The R-Series barrow from Fox is great value for money and is great for the beginner angler or someone with a slightly lower budget. It's price is at the lower end of the spectrum but still offers a strong design. The barrow can be taken apart into a more compact form for transport. Also featuring a quick release wheel to allow the barrow to be taken apart and put together faster and easier. The barrow also comes with a zippable bag on the underside and mud feet on the rear legs. 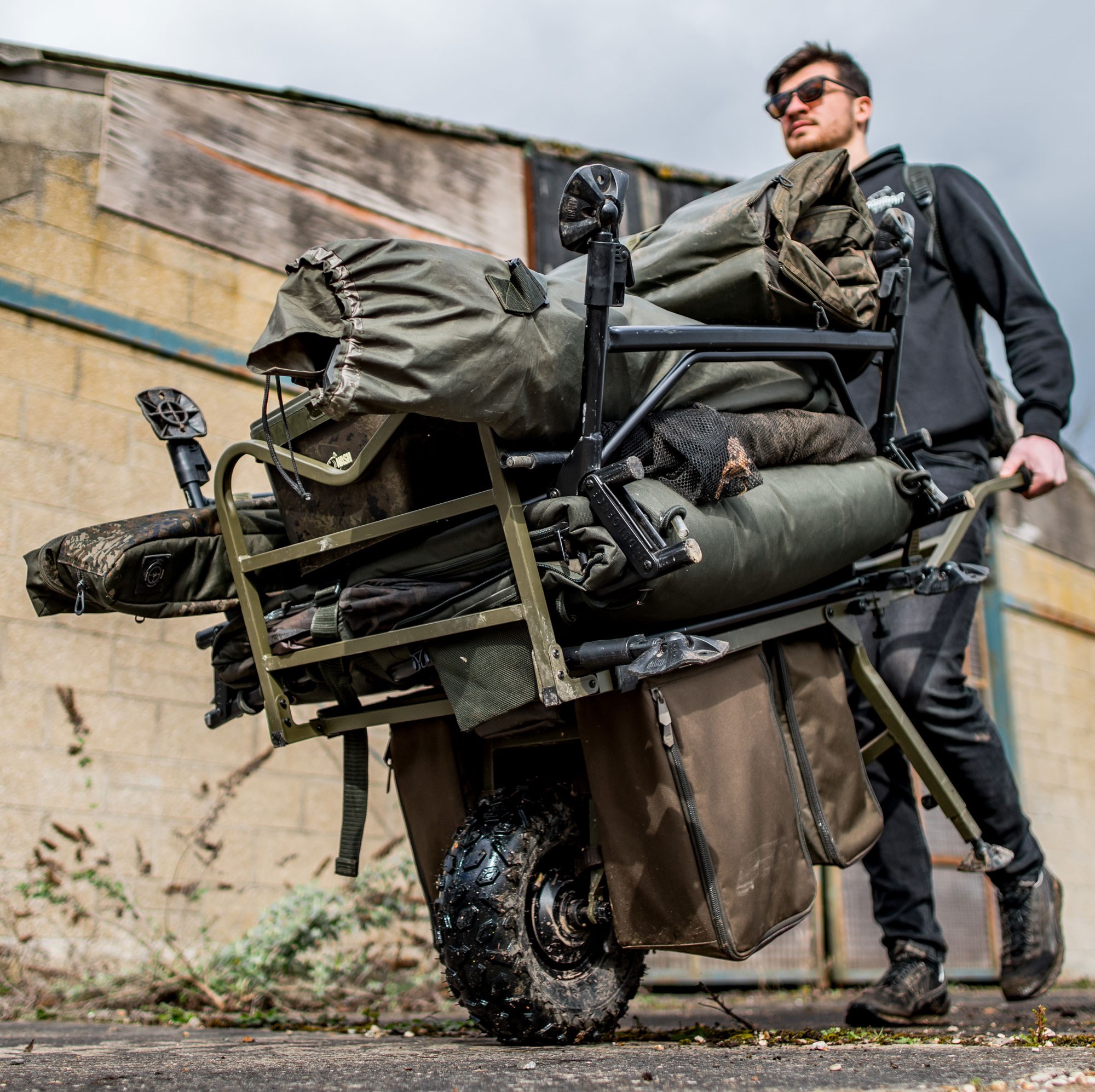 Nash’s Trax Metro barrow is definitely on the more expensive side of barrows but is packed with extra features. The barrow has the option to be used manually or motorized allowing it to be easily transported to swims. The barrow features three extra zippable carryalls making room for extra gear. The frame is crafted from high strength steel making for a sturdy build and also has attachment points for either bungees or straps. The rear legs are angled for maximum stability while static and adjustable mud feet for uneven grounds. The barrow has a 24V lead acid battery with adjustable speeds.