A Guide to Multiplier Reels

Multiplier reels usually have large spools which allows for a wider diameter line and a greater length of line for bigger fish. However, casting a multiplier reel can be harder than a regular fixed spool and some anglers can experience many tangles.

The multiplier reel has a free running spool built into a cage like structure. They also have two types of handles, double and single. Unlike fixed spool reels, the angler is unable to swap the handle to the otherside. Most commonly, the multiplier reel should be paired with a rod designed specifically for the type of reel. Rods meant for multipliers will have more and smaller rod rings which can help with casting.

Similar to fixed spool reels, multiplier reels have different sizes for different situations. Generally, the bigger reels are used for either long casting or fishing over sharp and snaggy bottoms as a thicker line can be used. Alternatively, the smaller reels are better for shorter distance fishing or over flat bottoms and less snaggy areas.

The average ratio for reels is around 4:1 and 6:1. These numbers indicate the rate of retrieval. For a reel with 4:1 means one full rotation of the handle will turn the spool four times. Typically, reels created for fishing over rocky and snaggy bottoms will have a higher ratio so the rig will sit higher in the water during retrieval and will be less likely to snag. 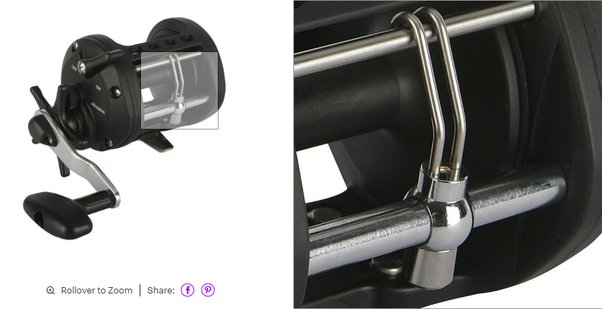 The star drag is similar to the fixed spool drag systems. It allows the line to be released at a set tension, preventing snaps when playing a larger fish. When storing the reel it's best to lower the tension as it can help the overall lifespan of the reel.

Many multiplier reels have a ratchet feature which is similar to a bite alarm. It will indicate a bite to the angler by making a noise. This feature is typically only used when fishing for larger species.